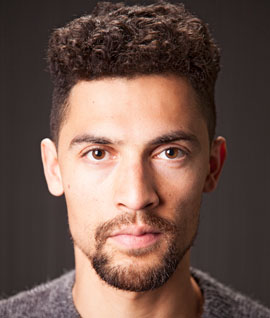 Moses Leo is a German-South-African actor, performer and vocalist, based in Berlin. He studied acting at the Film University Babelsberg Konrad Wolf in Potsdam.

He was involved in several motion picture productions, and in 2010 participated at the Berlinale Film Festival with the Ensemble film Barriere, directedby Andreas Kleinert. In the same year he was a selected fellow at the Berlinale Talent Campus. He had engagements at some of Germany’s most important theatres, such as Theaterhaus Jena, Staatstheater Darmstadt, as well as the renowned Ballhaus Naunynstrasse and Maxim Gorki Theatre in Berlin, among others.

Leo has been performing in several influential human rights theatre projects such as the Asylmonologe and Asyldialoge by the documentary theatre company wort und herzschlag.

In 2019 he was awarded the Price of the International Theaterinstitut as part of the ensemble of Mittelreich, a history-making theatre production, which premiered at the prestigious Münchner Kammerspiele.

In the last years, he has been working with several influential contemporary artists, such as Robin Rhode, for whom he performed as “Doppelgänger” in his opera performance Erwartung, presented at Performa15 in New York City.

As well as with Grada Kilomba, starring as Narcissus and Oedipus in her large scale video installation trilogy A World of Illusions, which has been shown internationally and was recently included into the permanent collection of Tate Modern, in London.

Besides his occupation as an actor, performer and voice-over artist, he is doing music – writing and performing his own vocals, developing his particular take on Deutschrap.