The African Book Festival enters its fifth round. This year’s programme will be curated by Mohamedou Ould Slahi Houbeini, writer and human rights activist from Mauretania and will aptly be titled “Breaking Free”.

Information regarding the line-up, programme and tickets will be continuously updated on this website. Follow @abfberlin auf Instagram to stay up to date or sign up for pur newsletter at the very bottom of this page. 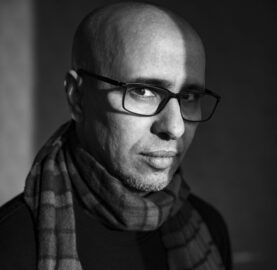 Writer Mohamedou Ould Slahi Houbeini curates the 5th African Book Festival in Berlin. Born in Mauritania in 1970, the author is known to many as one of the people who were unjustly imprisoned in the US prison camp Guantanamo Bay. His memoir “The Guantanamo Diary” (Tropen, 2015) became an international bestseller.

While still in captivity, Slahi Houbeini wrote his current novel “The Actual True Story of Ahmed and Zarga” (Ohio University Press, 2022). In it, the author takes his reading audience on an epic journey through geographical and spiritual terrain of the Sahara. Slahi Houbeini’s perspective on the relationship between humans and the environment is unique in contemporary African literature.

Since his release in October 2016, Mohamedou Ould Slahi Houbeini initially lived in Mauritania, but now resides in the Netherlands. For him, writing is a means of revenge against censorship and oppression. Consequently, the headline of this year’s African Book Festival is “Breaking Free”.

“My voice emerged when the lights went out and the room went dark. When I was completely alone, my conscience took control. I had to offer my confession every night. Not the false confessions demanded by my captors, but a confession of my full, true self. Writing is an act of recognition and compassion. It guides my pen toward love, kindness and forgiveness. It is this transformation literature offers. In it, I find true freedom. Therefore, the African Book Festival 2023 will explore the benefits and costs of freedom, ways to achieve it and the responsibilities that come with it.”

near S+U Alexanderplatz and U Klosterstraße

Our Partners and Sponsors
Thank you for making the ABF23 possible!
Get inspired by our previous African Book Festivals

View more in our archive